In his essay The Master Narratives, The Critical Principle (1),Arthur C. Danto tells the story of Castiglione, an Italian Renaissance painter, also a missionary who came all the way to China to introduce one of the most outstanding achievements of Renaissance art – the rules of perspective. The Chinese masters of Qing Dynasty, however, refused to use such invention. This refusal, according to Danto, di­d not mean that the rules of perspective were too difficult for the Chinese masters to follow. Rather, as a way of conceptualizing the world, the rules of perspective were absolutely useless for Chinese painters to capture their own world where there were no such dichotomies between the mind and the physical, the inside and the outside, the subjective and the objective. Western perspective originated from the idea that human beings controlled the world and the world only appeared under human’s organizing eyes. Such rules could never engage with the Eastern world where inner thinking and outer scene were inseparable. Just take one verses of a great poet of Vietnam in 18th centuries, Nguyen Du as an example, “Người buồn cảnh có vui đâu bao giờ” (“before the sad eyes there cannot be a happy landscape”)

Here I want to use this very incompatibility to analyze Ha Manh Thang’s artwork. I see Thang’s paintings as a conscious choice in presenting his own world. For him, painting is a kind of behavior that neither glamourizes nor represents the world. Painting is to understand the world. In his understanding, the world appears as neither Eastern nor Western. Rather, understanding is a process, where both the East and the West as two different worldviews become each other’s substance and effect, means and end, structure and form.

The first paradox: Between Western perceptiveness and Western spiritual world

In his statement, Thang is very conscious of his choice. He writes about this choice so explicitly that I need to cite him at length:As I alter the structures of the landscapes in my paintings, I by chance get to have access to detailed architectural drawings of some village communal houses in the north of Vietnam. When I look at the communal houses independently of the space, they look like they are expanded in spatial and non-temporal dimensions. This is very important because it gives me a rather different view of a living building with an appearance independent of what is presented in the drawings. Then you are no longer dependent on their real images. Instead, your thoughts are opened up and become more liberal. The drawing metrics are no longer important now that my focus is only to look at them from altering spatial and structural aspects.  Based on these, I now have all the freedom to develop newer structures and reinvent them with a new spatial layer based on the old one. Then creating a new structure from an existing drawing will give the landscape a new and liberal structure at a higher level, and the painting is like part of the geometric structure of the building under restoration, just like an architectural perspective drawing. The invented space looks newer and more multi-directional, which allows for personal exploration of each and every detail. On the background of this new structure, I connect the sketches in geometric forms, creating a transparent view of the landscape, giving it a mysterious and unpredictable look. (2)

This statement clearly reveals that instead of purely “imitating” the appearance of the temples in a realist or abstract manner, Thang chooses to alter the structures of the landscapes in my paintings to “expand in spatial and non-temporal dimensions”. On the one hand, he tries not to “no longer dependent on their real images”; on the other hand, he still relies on  “the old one” to produce an image where “the painting is like part of the geometric structure of the building under restoration, just like an architectural perspective drawing. The invented space looks newer and very detail”

If for the former generation of Vietnamese painters of the Reform time, the representation of the objective world usually meant to destroy the precision of Western perspective by either blurring spatial elements to create a vague space (in the case of painter Hong Viet Dung), or by turning deep space into two-dimensions (in the case of painter Dang Xuan Hoa). These techniques could help the artists to present the world in Eastern styles with strong spiritual and non-scientific impression. Thang, on the contrary, strikes to combine the precision of Western perspective with the Eastern blueness between inner thinking and outer world.

Thang is particularly fascinated by sketches of the Italian architects Aldo Rossi, who is praised as the architect of the urban. He deserved compliments because he understands that “the truth about beauty is hidden in the metamorphosis” (3). For him, architectual language resides  in the transfiguration of illusions of illusions” (4). I think these two comments on Rossi’s works can be directly used to describe Thang’s artworks. What is more interesting, however, is not the similarity in telling of the work of both of them. Rather, it is the fact that Thang gets his inspiration from Rossi’s architectural sketches. We should remind ourselves that for an architect as demiurge of modernity, drawing is an act of organizing and conquering the world, and of presenting the world from human’s point of view. An architectural sketch never aims for a kind of Kantian beauty, i.e. from “purposiveness without a purpose”; from “ the disinteredness”, or from “ critical distance”. On the contrary, an architectural drawing is always a kind of planning document which contains proposals to demolish, repair or reform the world. This kind of document is central to the project of taming the nature for human’s comfort.

In Thang’s works, all patterns are strictly arranged under the perspective of painter, whose perceptiveness aligns all things to an imagined horizon. All the figures in Thang’s works are well planned under a subjective order that has been strictly governed by imagined straight lines converging at the horizon. These figures, however, are painted by layering method where colors are overlapped to make an effect of blueness between the background and the patterns. This method actually tries to escape from the strict organization of Renaissance’s perspective rules. Here Thang is presenting his the most interesting paradox of his painting: the paradox between scientific precision of Western perceptiveness, and the vague and spiritual space of the Eastern worldview.

The second paradox: Turning an event of the future into description of the past

What Thang learns from Rossi’s architectural sketches is not only the structures under strict perspective rules. What really inspires him is the process of sketching itself, starting from the idea, the first draw, the adjustments, the erasure and the restoration. This is a process with no such thing as final or fixed images. Rather, the process reveals to us how the architect was thinking, what ideas and projects that he or she invests into his/her imagined structures that never exist when the sketch is finished.

An architectural sketch is never a drawing of something real. They are only projects or ideas about something that will come, or even something purely utopian. The sketched structures as such are thus based more on dilemmas, erasure, and openness than confirmation, decision, and closure. What one can see from an architectural sketch are not only ideas of the author, but also the process of ideas making. I believe this is why Thang is fascinated by architectural sketches. What he wants to capture for himself is precisely this ongoing “process”. In his paintings, the giant Angkor Watt, the Vietnamese Northern temples, or the ancient royal costume of the Lê-Trịnh Dynasty in the 17th century are not still scenes or objects. They are on their endless movements coming here from some mysthic time. What we can see is not only the beauty or reality of these historical objects, but most importantly, their “movements” which are brought into effect by carefully painted layers, by all the lines and colors that are in between of all dilemmas, erasure, openness, by the feeling that all are just imagined plans rather than something already there. What we can see from Thang’s works is “the connections between natural, social, historical and memorial elements”  là all the changes of the many centuries also “hành trình ngược thời gian”.  Within this “journey to the past”, even colors are no longer oil and acrylic, but returning to “soil, mud, ash, steam, firewood, gold, silver, and ancient lacquer red hidden in old appearances”

Now we know the second paradox in Thang’s works: the paradox of using technics of imagining what will be built in future to present something of the past.

Let us return to the story of the missionary Castiglione who introduced the rules of perspective to Chinese Qing Masters, and the story of these masters refusing such rules, because Western perspective could never touch the Eastern worldview of mind and the world are one. A few centuries later, however, it becomes clear that with Ha Manh Thang, a Vietnamese artist, an Eastern painter, this perspective rules, as an architectural technique has become the core of his painting that is neither East nor West, “We” nor “They”, “past” nor “future”. His painting’s eclectic core evinces our world today, where boundaries of geography, ideas, or principles all become blur. This is where the rules of perspective are no longer a tool to construct the visible world, but a method to make visible the invisibility

1. Arthur C. Danto, The Master Narratives, The Critical Principles, in After The End Of Art, Contemporary Art and The Pale of History, from p. 41to p. 57, Princeton University Press, Princeton, New Jersey, 1997

4,5. Arduino Cantàfora, A Few Profound Things, in Aldo Rossi, The Life and Works of an Architect, ed. by Alberto Ferlenga, from p. 4 to p.7.  Koeneman published 1999, 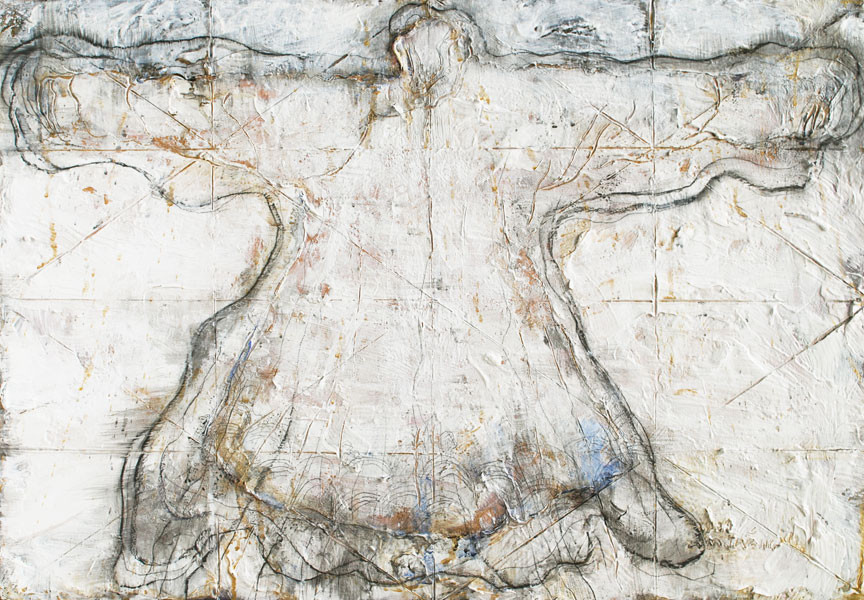