As part of “The Circle of Time” series (2017-present), this new body of work, titled “Reflection” (2021-present), derives from my previous two exhibitions “Ellipse” (2017-2018) and “Landscape|Mindscape” (2018-2019). Inspired by antique lacquer panels (on which parallel sentences are inscribed), I paint moments of transformation as seasons shift from one to another. This series of abstract paintings thus redefines the way we contemplate landscapes both in works of art and in the real world, blurring the boundary between the exterior and the interior, the observed and the observer.

There are two modes of seeing in “Reflection” - one stemming from the emotional and mental state of the observer; the other arising as the scenery being observed enters into a mutual dialogue with the onlooker. Scenery is the depiction of a landscape – whether actual and taken from particular images of the outside world, or imagined and originating from one’s inner psyche. Within the same painted space or context, these seemingly opposing forces indeed form pairs of parallels that complement each other in harmony.

Each work in “Reflection” consists of two parts: the upper half is painted on silk, and the lower half on canvas. Across the upper half, the spirit and tradition of ink wash painting is evoked through the nuance in tonality, and the vibration and flow of the brushstroke. Instead of black ink and natural pigments, I use less conventional materials such as acrylic paint, oil paint, and diluted lacquer, mixed with glitter to create a sense of iridescence and movement. On parts intentionally left unpainted, one can pierce through the silken veil to see what lies underneath. It is as if spaces near and far are now gathering on each and every coat of paint, and time is permanently puncturing through each and every layer of imagery. As light shines through, each patch of color would cast its shadow onto the wall beneath, forming a new layer of landscape. Through this second layer, the work seems more enigmatic, as the boundary between the real and the imagined, between what is depicted within and what is projected outside the work, becomes erased. Slipping through the sheerness of the silk, the work traverses beyond the boundaries of the canvas, as landscapes lie on top of landscapes, images hide behind images, all mixing to become one. It thus becomes difficult to distinguish the different layers embedded within a work. Are we looking at a landscape or its shadow? Where do its exterior end and its interior begin? Is it situated in the past or extended to the present?

The lower half of each work, painted on canvas, depicts the body of a peach blossom in various stages of procreation and growth. Its structure is strong and solid, in stark contrast to the dreamy and romantic qualities of the upper half. The root of the peach blossom blooms from the ground, eagerly growing upwards like flows of water, carrying with it flowers that scatter across stone-like surfaces. Such imagery takes its inspiration from the lacquer panels found in my antique collection.

With each painting in the series there are two different surfaces, two different techniques, and thus, two different effects - the balanced with the transitory, the vigorous with the poetic, and the eternal with the ephemeral. Within the limit of a singular work, the exterior and interior converse, the physical and mental conjoin, truth and illusion dissolve into the same plane, and reality and oblivion together appear in the same space, passing through the same stretch of time.

In “Reflection”, landscapes and mindscapes both reveal and conceal themselves, slipping and blending into one another through the process of creation. Let us be one with ourselves – fully contemplating the scenery we witness, fully absorbing what our eyes can see, and fully embracing who we are, within this landscape of which we are a part. 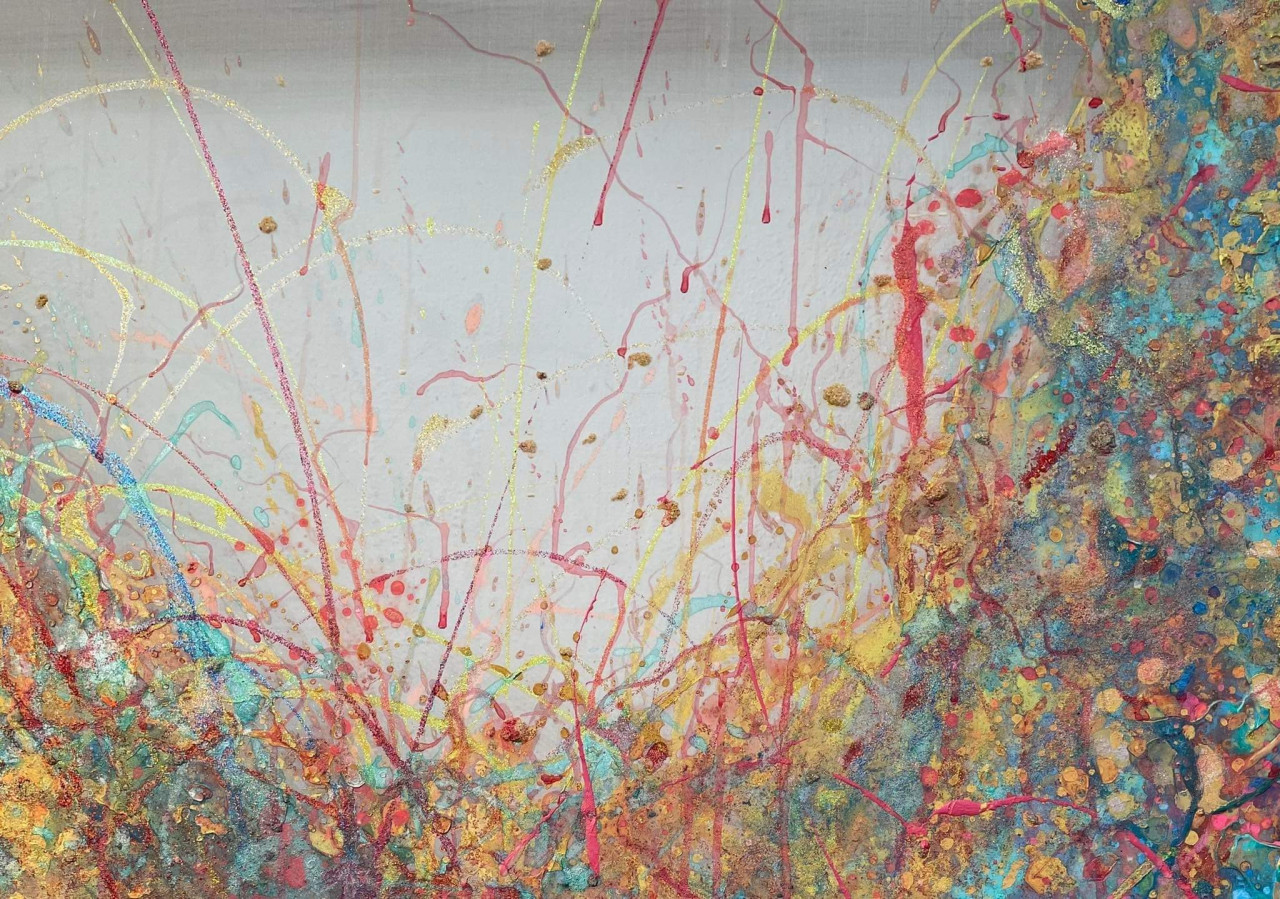