Of Emperors, soldiers and poetry- the recent painting of Ha Manh Thang (*) 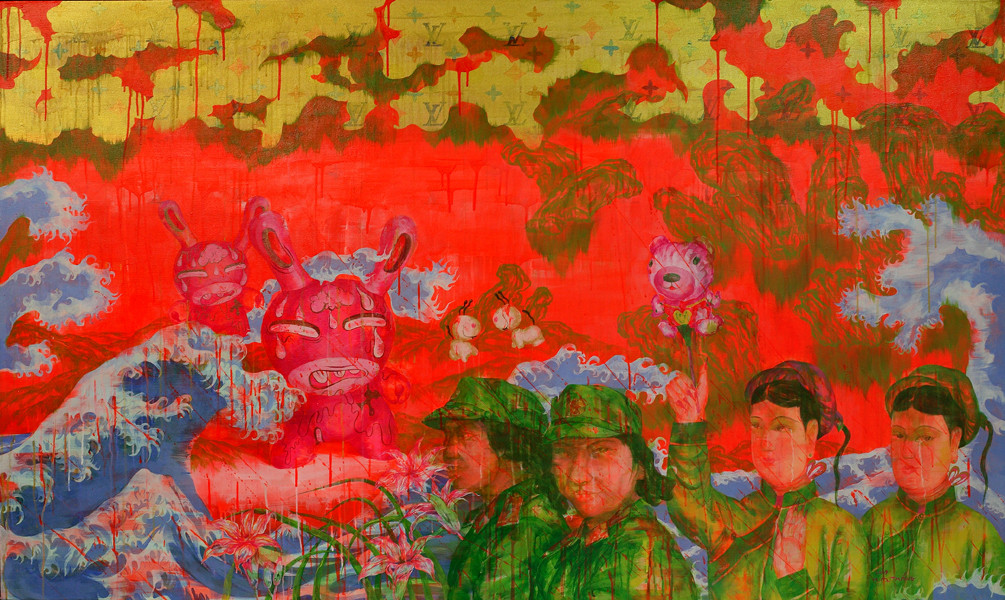 (1) See Taylor, Nora, ‘What’s Art Got to do with it?’, C-Arts Vol. 11, (November 2009), Jakarta/Singapore, pp. 22-25 for a discussion of painting, performance and the art market in Vietnam today.
(2) doi moi  is the the economic open-door policy initiated in 1986 by the Vietnamese government
(3) other paintings from this series have been and are currently exhibited in Berlin and Stuttgart in the IFA group show Connect: Art Scene Viet Nam
(4) Cf. Ha Manh Thang’s installatoin ‘Dream of a Skyscraper’ in Hanoi: 5000 Hoan Kiem Lakes, Vietnam Fine Arts Museum, 2007
(5) Emperor Duy Tan of the Nguyen Dynasty (Reigned 1907-1916) plotted to overthrow the French and was exiled in 1916. In 1945 he planned his return to Vietnam where he might have challenged Ho Chi Minh as consensus-building patriotic leader but was killed in an air crash on his way home.

(6) Versions of the poem by Ly Thuong Kiet on the paintings right upper side in Chinese and English:

The separation is natural and allotted in Heaven's Book.
If the bandits come to trespass it,
You shall, in doing that, see yourselves to be handed with failure and shame!

Ly Thuong Kiet was a poet of the 11th century and this poem, written during a period when Vietnam was freeing itself from a millenium of Chinese rule is considered a declaration of independence.

(7) A previous series Race Team, is less obviously connected to Vietnam and her people
(8) According to postings on several blogs
(9) The country was isolated by the U.S.-imposed trade embargo from the end of the Vietnam/U.S. war until sanctions were lifted in 1994. Joining the World Trade Organisation in 2007 accelerated Vietnam’s exposure to consumer culture.

(*)Of Emperors, soldiers and poetry- the recent painting of Ha Manh Thang (*) : an article for solo exhibition “Not Memory” , Bui gallery , Hanoi, April 2010
(*) Iola Lenzi : Iola Lenzi  is a Singapore researcher, curator and critic of Southeast Asian contemporary art. She lectures in the Asian Art Histories MA programme of Singapore’s Lasalle-Goldsmiths College of the Arts, is an advisor/contributor of the ‘Journal of Fine Arts’, Silpakorn University, Bangkok, and the author/editor of regional visual art research essays and catalogues. She has conceptualised numerous exhibtions of
Southeast Asian art in the region and China, major projects including Stitching the Wound Arahmainai in Bangkok, James W. Thompson Foundation, Bangkok (2006); Making History, Esplanade Singapore (2010); Negotiating Home History and Nation:
two decades of contemporary art in Southeast Asia 1991-2011, Singapore Art Museum (2011); Concept Context Contestation: art and the collective in Southeast Asia, Bangkok Art and Culture Centre (2013); and Masterpieces- digital art in Southeast Asia, Samsung art projets (ongoing). She is the author of Museums of Southeast Asia (2005), and writes for Asian Art Newspaper, London, among other specialist publications.