A Painter of A Younger Generation (*)

Our generation – I mean that of the author of this article who is now over 50 – seems not to understand the mind and thoughts of young people today. The discrepancy is day by day widening while life is undergoing rapid changes and old people very often tend to block the progress of things that they don’t know or are contrary to their habit. This holds totally true in art since there are more and more young artists whose thinking and works give a shock to    their predecessors. In the 1990s, this phenomenon was sporadic but at the end of 2000 a whole group of the generation of such artists emerged and a specific way had subsequently formed. In Vietnam it was known as the literature and art of the 8X generation i.e. the artistic works of writers, poets and painters… born in the period of 1980 – 1990. The members of this post-war generation who suffered little from the poverty caused by the subsidy system were thought to be very happy by in reality they seemed to go astray amidst the silly contention for money and profit under the new-born market economy in which public property is disintegrating and falls into the hands of some individuals whereas social morality is in recession or needs to be revised and traditional culture is running the risk of total disappearance with the downfall of communes and villages. Hà Mạnh Thắng belongs to the above generation of young painters. As his supervisor in the final exams at the Hanoi University of Fine Arts, I had known the new ideas advanced by him. Regarding his graduation work, I had told the Board of Examiners that should the jury fail him, no more students would dare to tell the truth in the future. Nevertheless, no one could bear the view of his pictures that portray young girls turning their naked buttocks (the only visible part of their body) to people’s faces. As a result, the artist could not pass one final examination. Still I am hopeful that Thắng has courage in doing and taking the responsibility and in fact his art gradually matures through several subsequent artworks with a deeper and deeper concern about social life.

Abandoning the perfect drawing of one picture in favour of painting a series of artistic works to convey one idea about life is what the painters like Thắng are doing. When contemplating a single picture, it is difficult to know what the artist is drawing but when we see several paintings at the same time, we will realize the social and artistic issues posed by the artist, hence one shape and figure or one space does not matter since a whole art gallery is required to express an issue. Lots of portraits were drawn by Hà Mạnh Thắng with the same style: very few colours, mainly monochromes but the brushstrokes play an important role in expressing the feelings and delineating the distinctive personal character of each individual. They seem to dig out every single state of mind including anxiety and worries but at the same time they also attribute the artist’s personal deductions to the “subject”. In each painting, the face is enlarged on the canvas and occupies almost the surface of the square metre as the visage is of central importance and an outsized face will render its view more visible. Thắng says that he is making portraits of sincere and gentle people originating from several rural areas, villages and the mountainous regions that he has gone through. The personages are mostly middle-aged - demobilized soldiers returning to the home villages, farmers in the plains of northern Vietnam. They all had undergone the country’s most difficult period of subsidized economy. Naturally when drawing their pictures, the artist also finds his own self in his works. Here destiny and people’s images have something both particular and common that represents what is characteristic of the Vietnamese. Everyone had difficult and awkward situations of which something was very hard to express, but overall they stemmed from a common circumstance in which the problem of how to support oneself constantly occupied people’s mind. The quality of life is at present much improved, everybody is free from cold and hunger, yet man’s surroundings are in a mess like a construction site, traffic accidents are spying on people, food and the air are polluted and life is full of mishaps. That is precisely what the artist wants to convey through his “Portraits”, since they record the deep transformations of the Vietnamese society before and after the subsidy system. This is the period when Thắng’s generation grew up and was able to witness it; a generation that is – as writer Nguyễn Huy Thiệp remarked – extremely solitary. “And after the subsidy system, parents are so absorbed with earning money, hence everything nearly begins at the beginning and starts from the scratch. I share this view, in order to better understand today’s youth and what Thắng is portraying.

One can see the influences of Western Expressionistic, Surrealist and Chinese Mao Pop artists in Hà Mạnh Thắng’s works. His life-confronting attitude is noticeable: daring to venture into the adverse and awkward situations in daily life, trying to display them as they stand or even exhibit their incomprehensibility. This leads to metaphysical, wearisome, sympathetic as well as sceptical feelings, probably the farmers, workers, soldiers and civil servants drawn by him do not think as he does. They are accustomed to a life that is full of permanent difficulties and hardships in many different ways so they hardly complain about life like their children who belong to a generation of offspring that selfishly cares about their individual life and takes little responsibility for their parents and has lesser sense of duty regarding the social community.

Hà Mạnh Thắng’s painting stands right in these times when the subsidized economy is nonexistent but the character of people is still affected by its aftermath, when market economy has just taken off while the citizens of a contemporary society of information and technology are but immature. Their images may be sad and full of contradictions. The artist looks at them and they look back to him just like children who are critical of their parents whereas the latter repeatedly scold them purely out of worries and anxiety.

Though living in the same house, both sides apparently do not understand each other or each generation views the same issue differently. It is highly possible that some try to sap the sacred temple of others but not for sure they could build a better one.

(*) This artice by Phan Cẩm Thương for "The Rain and The Small Stream" solo exhibition, Ernst & Young Asean Art Outreach, Singapore, May, 2008 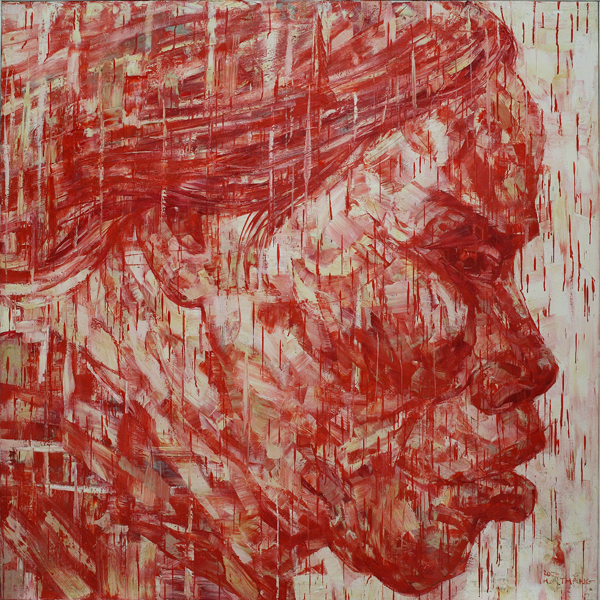