Is this Heaven? Monumentality and Doubt in New Works by Ha Manh Thang

Monuments are strange comforts. For a structure to be graced with the status of a ‘monument’ implies a kind of publicly recognised significance. This significance could be intentional, as in the case where a building is created as an act of public memory: what the art historian Alois Riegl called a “deliberate monument” in his seminal essay on monumentality [1]. Alternatively, the monument can be made by history: those structures that survive the passage of time and seem to encapsulate the values of the past in physical form. But both types of monument are linked by a sense of loss. While they appear to give solidity, permanence and tangible bulk to our cherished ideals and our collective past, by their very existence, monuments acknowledge the impermanence of life and the vicissitudes of history. They are attempts to hold on -- or failing that – to enforce remembrance. In that sense, monuments are fragile bulwarks against the inevitable.

In his new series of landscape paintings, Ha Manh Thang appears to speak directly about these ambiguous qualities of monuments. Thang has chosen as his principal subject some of Vietnam’s most iconic structures: the imperial citadel of Hue, and Ho Chi Minh’s mausoleum in Hanoi. In his representations, the monuments are pared down almost to pure forms, and presented stripped of context, landscape, human presence and even ornament. The monuments appear to hover in unanchored space, as if the artist were seeking a critical distance from their iconic presence. In Hanoi Landscape no. 1, the familiar form of the Ho Chi Minh mausoleum appears netted within gridlines and orthogonals, stretching toward a random vanishing point on the horizon. This rendering replaces the mass and aura of authority of the physical monument with a disconcerting sense of precariousness. Caught in the architectural grid, we are reminded that the monument was the end product of a human process of deliberation and construction, rather than an inevitable and eternal marker. Ha Manh Thang returns to the form of the mausoleum several times, yet each time its image appears elusive, existing primarily as an outline, or perhaps a transparency. In one work, Thang has also included a phosphorescent under--painting of the monument, visible only in darkness, when the structure glows green, almost like a retinal afterimage. These repeated examinations seem to suggest a kind of doubt: a relentless questioning of the monument, not just of the stability of its meaning, but even of its physical presence in the landscape.In these paintings, there are no reassuring historical narratives, nor is there an appeal to easy nostalgia through the picturesque. In some instances, the treatment of the forms verges on stark. In Hue Citadel no. 3, the structure of the citadel wall appears jutting and angular against a backdrop of hard, cool grey. The text emblazoned across the canvas – this is heaven – looks to have been repeatedly erased and re--inscribed, and betrays the confidence of the statement with its hesitant and wavering quality. The reference to heaven could be a reminder that the imperial city of Hue was carefully planned according to the principles of geomancy, with buildings, site and waterways organized to most auspicious advantage inside the vast enclosure of the citadel walls[2] The building of the new imperial city commenced shortly after the establishment of the Nguyen dynasty in Hue in 1802. It was a symbol of the confidence of the new dynasty, and designed to ensure its longevity (including through practical measures, such as the incorporation of new, French---style fortifications). The architectural planning expressed a sense of order and harmony that encompassed the relations of heaven and earth, and implied the emperor’s heaven--given mandate to rule.

Yet before the close of that century, the cultural certainties of the Nguyen dynasty were irrevocably shaken by the imposition of French colonial control over Vietnam. Less than a century later again, the geomantic order of the imperial city was further marred by one of the most destructive battles of the Vietnam War. Elements in this painting – the gunmetal grey, the drips of orange like a faded bloodstain – could also be read as subtle references to that recent history. Hue’s imperial city was formally recognized as a World Heritage Site in 1993, but in the passage from functional building to historical monument, something of its original confidence and ambition was necessarily lost. To look at the citadel now is to look at the physical remnants of a system that has been all but completely extinguished. Given thishistorical context, what claim to the eternal – to heaven – can the monument really make? Thus Ha Manh Thang’s painting suggests the sceptical reverse of what it explicitly declares: is this heaven?

Could it be that monuments have a heightened significance in Vietnam, where the cultural paradigm shifts of the last century were particularly sweeping and radical? In the midst of such drastic revisions, what remains achieves a special poignancy. Ha Manh Thang has dealt with the theme of change in his paintings before, especially the incommensurability of post--Doi Moi consumer culture with the Vietnamese traditional values. In past series of work, such as Bride and Bridegroom (2004--2012) and Not Memory (2008--2010), his approach was to juxtapose the cultural symbols of past and present, creating an absurdist humour and pop-- art aesthetic. Aspects of this approach linger in certain works in Heaven is a Place, especially where Thang has included the iconic structures of contemporary urban Vietnam. In Saigon Landscape no. 1, Bitexco Financial Tower appears at the vanishing point in the centre of a maelstrom of energy, while the landscape is filled with spectral buildings and anachronistic creatures, such as a Vietnamese beauty in the style of a traditional folk print. The work suggests a city in which the undigested cultural past lingers awkwardly amidst rapid urban development. In general, however, in his new landscapes, Thang has rejected the representation of the surface effects of change in favour of an intense focus on monumentality. When viewed together, these two types of landscape paintings challenge us to imagine how the icons of today will become the monuments of the future. It is a kind of vanitas: the ruins of the past reveal the precariousness of the present, and our tenuous place in the world and in time.While Ha Manh Thang’s treatment of the monuments may be analytical, it is also painterly, giving the monuments a forlorn allure. The layers of paint and conspicuous drips create a blurred effect, as if the monuments could not be fully contained within the precision of the schematic drawings. For these works, Ha Manh Thang has also generated a personal and symbolic language of colour, partly inspired by the colours of Vietnamese traditional arts: the cobalt blue of Vietnamese blue and white wares, or the intense black of lacquer. For me, the melting, faintly--pearlescent blue green in Landscape of Hue Forbidden City no. 2is also strongly reminiscent of the celadon glazes of Vietnamese ceramics. These colours create subtle references and new associations with the monumental forms. At times, the use of colour can also be very unexpected, and functions to distance the monuments from their conventional historical meanings. In several representations of the Ho Chi Minh mausoleum, for example, the landscape is a saturated ultramarine, a disconcerting choice for a building which has such immediate associations with a certain shade of red. In blue, the monument is oddly serene, and divorced from its own intensely--loaded history. But perhaps this act of decontextualisation – like the other forms of decontextualisation visible in these paintings – suggests a thread of optimism amidst the doubt. Monuments represent what is lost, but they can also be re--imagined and re--made. Their significance is not determined by the past: rather, they can be given new associations and meanings, to be woven into the present. 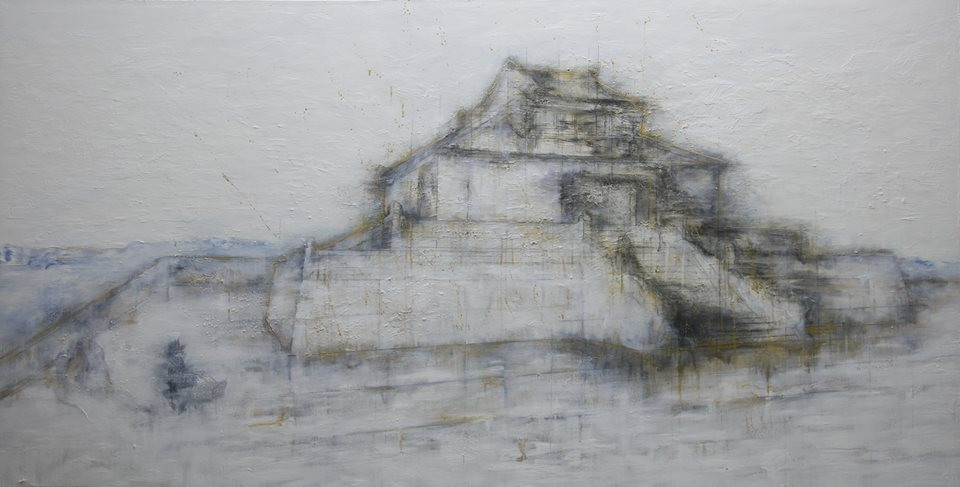